What did you do to your Olds powered vehicle today?

Yeah i did it a long time ago. Was having trouble getting over the mountain to my old job.
The original adapter config is below. But that's the new replacement black manifold base gasket under it in the picture.
The old gasket.. being a bare surface under the Edelbrock 600 ... was getting pretty rough and certainly causing flow disruption.

I got away with this because the manifold under it had reasonable representation.. Bolted the 4bbl adapter and base gasket right to the manifold.
I think I discarded it , but I could see witness marks from the old four vapor jets were embedded into it. It was pretty rough. 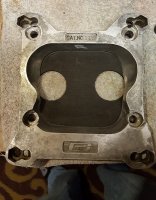 This setup would be revisited under tighter scrutiny last weekend as below.

That steel plate weighs a couple pounds and is almost 1/4 " thick.

Old setup vs. new compared below. Now the 4bbl has a nice stainless surface . And no distorted adapter wall.
Measurable or not, I should be getting some gains in there.

Basically, instead of mounting the adapter to the manifold, I brought the manifold base to accept the 4bbl adapter.

From here, I took the MrGasket 1932 with it's gasket, positioned it on the assembly above, and tapped it with a rubber mallet.
That left me where to countersink the 4 chrome hex heads and cut the gasket holes.
Now I mount the carb and adapter to the four corners of the plate.

This is the first time I have had a decent idle since her reawakening. And vacuum guage has me at 18-20 in/Hg. It sounds great and working good.

Dropped the 350 on the floor

That sucks... Unrelated, but one time I had a car on a friend's lift. It was a two post lift, with two arms on either side that reach out to the frame rails. It was a freshly painted car, top and bottom, and we used soft pads to protect the frame at the contact points. Obviously, you place the contact points where you want them when the car is on the ground, and then once it's in the air, you would raise and lower the car by varying amounts, depending on what you happened to be doing. (Car leaves the ground, then it's 6' in the air, then 5', then 6', then 5'...) Of course you'd lock both sides at whatever level you currently had it before stepping under it. What my friend had neglected to mention (and I hadn't realized) is that the posts weren't perfectly parallel, and as you moved the car up and down, the arms would "walk" and the contact points would shift. One of the arms had extended by a couple inches, and the contact pad was just barely touching the frame. Not something I had even conceived of as a possibility.

I was in the process of raising it back up to about 6', and the frame fell off this one pad, and onto the arm itself. It was about a 3" drop, but as I was standing there, I watched the car violently rocking back and forth on the arms, a rocking that SEEMED to be about 2' forward and 2' backwards, until it finally stabilized. This was probably the single scariest moment thus far in my life, watching a 4,000 pound car literally teetering on the brink, six feet up in the air. Once it stopped rocking and I cleaned myself up -- and WITHOUT getting under it -- I checked all the other contact points, and gently used a tall transmission jack to raise this one corner and get it back on the pad. I then lowered it very carefully, 6" at a squirt, holding my breath the whole time. Needless to say, I used a jack and jackstands to complete the restoration ha ha.
Expand signature
--
Mike
1983 Cutlass Supreme, 1970 Olds 455, TH350, 3.42 8.5"
Reactions: 82cutty

Olds 307 and 403 said:
The other option is a old discontinued Edelbrock SP2P intake. Small triangle ports and an idle to 4500 rpm range. Others have put them on 260's and noticed an improvement. I am surprised you gained anything with that bottle neck. I found a ton of timing, headers and duals helped power. I sold my SP2P to a guy who wanted it for a 260 or that would have been the next step.
Click to expand...

What happened when you dropped the 350 on the floor? Bust anything? .. you or the motor ..

Gonna google that intake and see if one's around. But since a motor swap is in the somewhat future, it will need to be "on the cheap". I still need to post the story on this car. Lots of work elsewhere done to get back to street worthy. This motor isn't where the money's going. As far as the "bottleneck" issue, the Rochester dualjet was still around during the origional adapter fiasco, years back. It did help, or the Rocho would have went back on. The stock manifold did. 4bbl adapters feeding 2x manifolds will clearly always have tremendous shortcomings, for sure.

Well I couldn't find the new thread starter and since I'm doing this today, this thread will do.
I wonder if this is just smaller filter and will work OK. 82 Cutlass 260 with.. what I thought.. was a Th250. 13 bolt. My pump gasket, Detent cable, front ring seal so far all matched.

Duralast trans pan gasket and filter here. Gasket fits, (old one leaks) which is why I dropped the pan .
Looks like their filter in the kit will work. This may simply be a universal kit.

Current filter is dirty. Pump ports match up. Maybe the old filter is just deluxe or something?

Car up in air and looking for an opinion. I've done trans filters before but they haven't varied this much.
New filter also draws from the top side. What do you think ?

Olds 307 and 403 said:
Your old one is the deluxe Dacron style, either one should work fine. I have used both before without issue other than needing slight bending on the Dacron filter with a TH250C/TH350C. The Dacron filter supposedly filters better but doesn't flow as well.
Click to expand...

Well I can formally announce Bloody Mary the transmission is finally done leaking. @Olds 307 and 403 I recall your comment that they leak like a siv and I didn't escape that curse over here.

The highlights of the afternoon were one filter bolt broke off, amazingly with little effort. It came out easily, again, because it wasn't really tight. I can only imagine the last guy cracked it. I had an exact replacement in my coffee can and was on my way. So I have a computer in the garage and I go on the internet and google torqe specs for the pan and , obviously, the filter. Three sites I hit, all of them alerted my antivirus and it said "you don't want to go here". So I gave up. I did see 12 foot-lbs for the pan briefly in a link description before I hit it. I got to save the www oldspower credentials over there.

I tightened the fillter to "daddy torque", and for the pan after seating it in, I used the torque wrench but stopped where I thought it should be. Wound up being 8 lbf-fp. If it should be tighter I can do so. Better than distorting a gasket.
Reactions: Olds 307 and 403 and TURNA

Promised my Wife her garage back so I did some spot-fill with liquid flex-seal in the rips in the vinyl top this AM. That's right, it comes in black and it works. I need it sealed before it goes back outside. We all know what's under there. And that Pandora's box is going to have to wait until spring. It's a one-car garage and I don't want to tie it up in the winter with a project of that caliber.

Also did finishing on two spots that were weld repaired on the body. One was the driver fender. A deer ran into me and the replacement fender I used had holes on the top of it from a turn indicator. The other was a crack by the driver's mirror. Was there when I got the car and I have no idea.

These areas were fiberglassed long ago. But metal expands, and fiberglass doesn't and it gave me cracks the finish. So three months ago I ground them out and hit 'em with a borrowed Lincoln flux core welder. Today I finally leveled them off with light putty. Guess it was autobody day.
Last edited: Jan 5, 2020
Reactions: TURNA

The "super coil" that was in the Accel HEI. I swapped out the whole stock distributor assy to Accel years ago. High Voltage ignition modue is there as well.
I googled the BT coil it's yellow with the high voltage warning just like mine. But mine has white / red leads, no yellow. But it is older.
I also noticed I'm at .060 on the plugs. But came across references out there to .080 . What was your 260 at?
Last edited: Jan 12, 2020

I got the preferred coil then. Thanks for pan & spark info today. I'll fine tune those values in this week.
Reactions: Olds 307 and 403

Today? Did more pricing on the exhaust setup. Thinking of going headers to x-pipe , straight run down the middle, two mufflers, etc just like all the GBody setup images out there.

The headers in mind.. are cheap Flowtech that @Olds 307 and 403 hates, ... and so do I. I'll just get good gaskets.. I'm considering these only "stand-ins" because they will eventually leave with the motor. Headers will hit a Summit Dynomax 2.5" crossover pipe, under a Summit (TH350 ) cross member that should seat my TH250. Guess I'll find out if my body bushings are ok. Driver's hump hits high on those things I hear.
Mufflers I'm still looking for something calm . I'll rely on the headers and duals for tone. This 119 HP baby block doesn't need to be the loudest car in town. Low end is ok but I'm using a lot of full pedal to manipulate highway. Big noise and no action will serve to do noting but embarass. Still in cruiser mode here. Maybe Walker Quiet SS or something.
Last edited: Jan 16, 2020

Go Dynomax Super or Summit Turbo mufflers. I love the Hooker Aerochamber mufflers with shorties and X pipe under my 88 CSC. Under my less padded interior in my 70S, droning and loud. Here is the Aerochamber X pipe setup on my 88.