My winter project this year was to re-pad my steering wheel. I like the wheel and it was generally in good shape, but the padding underneath was foam rubber, which had turned to orange goo. I hold the wheel at 11:30 and 4:00, and at the top, the leather was squishy and starting to wrap around, so I figured I'd better do it ASAP. (A friend mentioned when I told him about this how the steering wheel is the part of the car you handle the most, and yet you don't really think about it that much....unless it has a problem) No progress pics unfortunately, I was too intent on doing the job.

The first part of the process was to remove the leather cover. I insanely decided I was going to reuse the old thread, because it was a perfect color match, so I found the ends and untied the knots. Was pretty easily able to get both individual threads out in one piece.

I then removed the cover, being careful not to damage it. It did get sort of rippled or creased in a few areas, but this completely reversed once I had the cover back on.

Was a bit of a nightmare removing all of the gooey old foam rubber, but naphtha did a pretty good job. I left most of this residue on the inside of the leather, because I figured it wouldn't cause too much of a problem, and would have been very hard to remove without damage.

While I had it apart, I decided to do something about the paint on the spokes. It was the original crinkle paint, but there was quite a bit of rust visible on it, which I thought looked junky. I tried to save the original texture by only lightly scuffing it, but this was a bad idea. All of the rust bubbles and pits were visible, and the scuffing removed most of the texture anyway, so I did it a second time. Sanded it completely down to bare metal, and used flat black. This ended up being not a bad way to go, because you don't see much of it anyway.

Took a bit to actually get the foam on, mostly working out how I was going to do it. The foam I used is a polyethylene packing foam, the thin white stuff. This has a nice spring to it, and I don't think it degrades over time like foam rubber. There's a slight risk of the air bubbles popping and losing the spongy quality, but this doesn't seem like it's going to be a problem. I started by trying to trim pieces to fit the wheel properly, but I quickly realized this would be extremely difficult. Every time I started honing in on a final shape/size, I'd realize that I didn't have it precisely centered the way it was when I initially measured it, so it wouldn't be just right. Finally ended up just covering the whole wheel with headliner adhesive, and then working a full sheet of padding onto it. Trimmed it at the seam area on the inner diameter of the wheel and it was perfect.

Worked the leather back on, and then started the process of stitching. This seemed like it was going to be a nightmare, but I discovered probably the one important trick, which is how to get proper tension on the thread so that it's consistently tight. The trick is, you DON'T worry about the tension right off the bat. You just get the stitches in, and keep working along. As you get nearer to the end, that's when you go back and start tightening the stitches from the beginning. The stitches form little X's, and you can use a heavy needle to take out the slack by sort of prying through the seam on the middle of the X's, starting at the first one, and working your way back to the end. You might have to do this two or three times, until you've really got all the slack out.

Unfortunately, about two thirds of the way through, I realized why reusing the original thread was such a bad idea. Between the leather being old, and the new padding, there was just no way I was going to be able to do the same exact run the factory did, using the same exact amount of thread. And even if I was able to get to the end, how to tie the knot? So I decided to retain my stitching up to that point, and start with new thread mid-stream, figuring I would just tear it all out and use the new thread from the beginning again if I had to. As it turned out, it's really almost imperceptible, the change from the old thread to the new thread. There's just a small additional X where the two meet. If I was going to do it again, I'd probably just use all new thread, for consistency. The thread I used -- was able to find -- was just button thread from Walmart, and I used four strands. This takes a little extra work, combing the threads to keep them from looking bunched and twisted, but it wasn't a big deal.

Did the top part first, that's logically the right place to start, and then did the bottom. Used new thread on the two spokes first, and then did the whole run between the spokes using the original thread. The spokes were actually the hardest part, they may not have been as well padded from the factory as how I did it, so there was a lot of gap in the leather to take up at the seam, but it worked out alright.

When I was all done, I cleaned and conditioned the leather. The top area at 11:30, where I hold it, still shows slight creases from where it was starting to wrap around with the old foam, but it's not too bad. You see it more than feel it. The summer heat might take some of that out.

I was pretty impressed with the end result. It looks almost new, except for the slight degradation in the leather from years of use, and the lack of texture on the paint. The feel is unbelievable, it's very much like new. 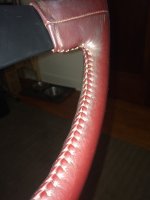 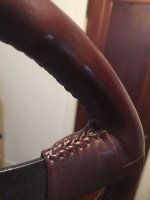 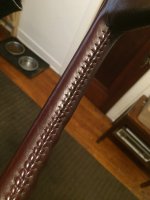 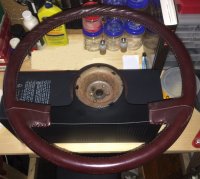