Thoughts on a short term trans behind healthy torque, a 2004R or TH350? 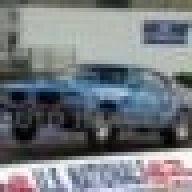