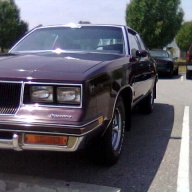 I was a member in G-Body Forum and Olds Power Forum, but I dropped off the Forums years ago, and when I put my Cutlass in storage in 2012, and stopped working on/driving, my attention went elsewhere (an E-36 M3 and restored an old Porsche 912).

I'm about 2 years from retirement and want to refocus on the Cutlass. My dad and I have always owned an Olds, my dads first was a 68 Cutlass, and from there he stayed in an Olds until his 96 Aurora gave up the Ghost. My first car was a 72 Cutlass, which I owned until 82. In 2000, I acquired my 1986 G Body Cutlass 442 Salon from its original owner with 65K miles on it, and it now has about 98K miles. It is mostly a survivor with ony a few changes.
- Replace Headliner
- Cat back Hooker Dual Exhaust (Adapted from Monte Carlo)
- Removed AIR injection system
- Shorter springs and shocks on Front Suspension
- Sony Head Unit with infinity Speakers and Subwoofer in Trunk
The rest of the car is original and in good condition with the exception of paint which is terrible.

So why am I back? I am going to retire from the Army in a few years, and have been playing around with the idea of buying a new Sorts Coupe (ranging from Mustang to Camaro, Challenger, F Type, Audi RS5) But I also HATE to get rid of the Cutlass, and am thinking of doing a complete resto-Mod to include:
- Modern V8 engine and drivetrain.
- Complete tear off and replace with Hotchkiss or other Modern suspension and Frame reinforcements.
- Complete overhaul of Brake system (ABS optional)
- Compete tear out and install of new Interior. Seats, Console, Dash, Gauges, HVAC controls, door controls. (on the fence on this, I want updated and modern capabilities.)
- De-Chrome most of exterior, some custom body work, shaving of door handles, trunk lid, Grill Emblem etc. Going for a smooth GNX monochrome look, and will be in original color (Black Cherry Metallic)

Thinking of a complete dash swap matched to whatever power train I install. This will simplify many of the electrical issues (maybe lol) Here are a few pics of the car.