Hi Olds Fans! I forget what my old handle used to be on the prior site. But I do remember Beeterolds and Eightupman and some other familiar names here like Hurst. I had the 82 Cutlass with the 260 and still do. For a while it was my daily driver. Then it sat as a second vehicle. then as a third, and it was ignored for about 10 years.

In Sept, the game started. Pulled the TH250 and did the pump gasket and front seal. The internal trans leaks were the main reason the car sat. After the repair, the detente cable began leaking, once disturbed. That had to be fixed twice. I also have the pan gasket and filter here, waiting till I feel like it . Slow leak there. But at least I don't have the pull the trans again to do it. Boy did this trans like to leak. I nicknamed it "Bloody Mary"

All the brake calipers and shoes replaced. 4 feet of brake line replaced for now. All motor and tx mounts replaced. Sway bar mounts and links. Exhaust crossover pipe replaced and down-pipe got a donut. Window weather strips replaced. Water was getting in the doors as it sat. Basically the only rust of concern. This car got the "Rusty Jones" anti-rust undercarriage treatment from the dealer. It's flaked off 40 years later of course, but the car benefited.

The Cooper Cobras looked new with the whiskers still on them. But closer inspection revealed all the tires are dryrot / cracking. So new tires went on. Belts, Battery, Carb kit, blah blah blah. Replaced the fuel sending unit. Reinstall tank to discover it leaks, of course. So the dropped a second time and replaced as well. Now I'm under the hood tuning in the 260 the best I can. It's not going to stay in there.

That's pretty much the Olds situation I'm wrapped up with right now. I see my (imaged) posts are always "pending approval" so I guess I'm a "probationary member" , If somebody knows how long that will go on, let me know. I couldn't find it. Anyway, Happy Holidays Guys . And Catch you in the forms. 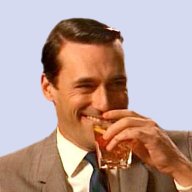 GP403 said:
got your posts approved. don't know why it was flagging them, it sometimes randomly does that with legit posts... welcome back!
Click to expand...

LOl don't tempt me. I was looking at fuel regulators and a lot of that boost stuff was coming up LOL

Olds 307 and 403 said:
Crank the timing way up on that 260, till it hits against the starter, then back off a bit, big 7.5 to 1 compression can take it. I imagine the Edelbrock carb is probably way too rich for a 260. I have found TH350's and 2004R's a PITA to seal lately, one of the most frustrating parts of owning these old cars. The 260 supposedly had a unique smaller, stainless crossover pipe, really the whole factory exhaust is a bad joke. Actual dual exhaust helps the 260. Mine ran even better with Sanderson shorty headers and 2.5" X pipe exhaust, almost thought there was 307 in there.
Click to expand...

Timing's advanced as possible on my Beeterold's HEI distributor. Will be refreshing the cap and rotor. Just cleaned it up for now. At the carb I have the kickdown cable triggering with the secondaries. It likes the new fuel pump I put in this weekend. I am certain the old pump was weak. Now when I mash it at 60mph, I hear it kick in and I get a little boost. That's new. I have a cheap dialer FPR regulator coming this week. I'll experiment with that. No flooding or weeping out the bowl breathers yet.

Speaking of that.... When I do the regulator I'm also going to open the carb and take a second look that the bowls are right and the valves are clear. Found a small piece of rubber in my filter .. caused by ramming tight wrong hoses on the fuel line. (weeks ago ) Correct 3/8" hose was installed with the new pump Saturday. Unfortunately, this debris event could have been repeated past the in-line filter, and upstream to the carb. I want to just check in there again.

Olds 307 and 403 said:
Yeah Thornton has some pretty affordable $299 Stainless SBO headers that take A body down pipes
Click to expand...

You put that bug in my ear. Went and found a set of chrome Flowtech 31152FLT. Open Box. I wasn't going to do this. But I guess I could use everything from the collectors down on the 350 upgrade later.

You guys are a bunch of enablers.

My suggestion is when you upgrade, look for a 403, great street engine. You can make torque and decent hp cheap.
Reactions: 82cutty

Kennybill said:
My suggestion is when you upgrade, look for a 403, great street engine. You can make torque and decent hp cheap.
Click to expand...

Today I just saw a redone 403 block. New pistons, rings, cam, and matched heads for $1k shipped..
Hope those deals are around when I'm ready.
K

If you snooze, you loose. Those deals are getting rare. Some times you have to pull the trigger and buy it even if your not ready. Borrow the money, make payments, sell something you're not using. 403s are getting rare. 3 years engine. Jmo.
Reactions: 82cutty

I've done head gaskets, valves and lifters and many timing jobs, but I don't have the tools, math, or any experience with pistons and cams and comp ratios. So I am kinda looking for a reworked block with fresh cam and heads. I can run with it from there. But this guy I don't see a lot of history.
Just FYI the stamp by oil filler valley says 557265 4B and by the #1 cyl stamps 4A . Isn't this the "long block" ?

@Olds 307 and 403 ,Even though I just refreshed the crossover and donut , you still have me thinking about headers. I'd offer to take yours if available, but you're too far away. New Flowteck 31152 chrome are like $200. I'm thinking about grabbing them. But they're not shorties. But I like building off collectors. You're right about the bottleneck exhaust. You gotta love the vacuum controlled flow constrictor on the driver side for cold engine emissions....

Olds 307 and 403 said:
Get the Hedman over the Flowtech if you want full length. I had Flowtech full length ceramic coated. They had rust pin holes and peeling in no time plus thin flanges that needed double gaskets. No, I just mentioned the Thornton shorty headers for sale on eBay but a 403 should come first. My near stock 403 with a 2400 rpm stall would do 1/4 block burnouts but then went flat with stock exhaust. Cat back exhaust with no cat, wasn't one on the car, then shorties and true 2.5" exhaust. Both helped power without a doubt.
Click to expand...

Ah. Price was the real factor. My single is leaking further down somewhere. I'm also missing a cat converter. So I saw a $200 set of headers and was thinking if I do that, get the correct cross member, and go duals, later when I upgrade the power plant I am already set. Then pitch the cheap headers. This 260 Isn't getting $400 headers...
You must log in or register to reply here.

Hey im back too