Couple of other exhaust questions?

Don't really have a direct answer to either of your questions, but I did put Thrush turbos on the Cutlass when I first put it together. Didn't really like them that much, they were kind of quiet for my taste. But then, I'm one of those Flowmaster guys. Put Super 44s on it last year, and am pretty happy with them.
Expand signature
--
Mike
1983 Cutlass Supreme, 1970 Olds 455, TH350, 3.42 8.5"

Don't know if I've ever heard glasspacks on an Oldsmobile, they sound pretty fantastic. They have a lot of the deepness I love with the Super 44s, might actually sound better than them. Hard to tell when they're not side by side.

It's also funny the way different cars react to various exhaust systems. The system on the Cutlass dumps before the axle, and even though it's Flowmaster, there's no droning, but it's a little quiet. I have a '70 DeVille with Flowmaster 50s -- the quieter ones -- and a complete system, and it droned terribly. Both cars have about the same CR and factory heads, the DeVille has the factory cam, a crossover, and lots of insulation, the Cutlass has a bigger cam, no crossover, and much less insulation, and yet the DeVille is the one that had the drone. It finally went away after about 1,000 miles.
Expand signature
--
Mike
1983 Cutlass Supreme, 1970 Olds 455, TH350, 3.42 8.5"

Of course, V8s just naturally sound best. Had a kid flag me down in the DeVille, he told me it was the best sounding exhaust he'd ever heard ha ha. Something about the Cadillac firing order gives it a different sound... Oldsmobiles are different too, but it's not quite as striking. Look forward to hearing your glasspacks.
Expand signature
--
Mike
1983 Cutlass Supreme, 1970 Olds 455, TH350, 3.42 8.5" 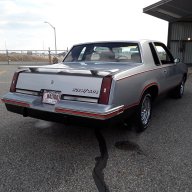 G body system, Mandrel tail pipes exit behind the wheels, going back on this weekend. 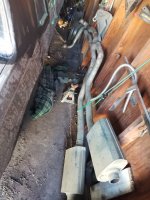