You are using an out of date browser. It may not display this or other websites correctly.
You should upgrade or use an alternative browser.
T

I acquired (Early this morning, actually) this 442: 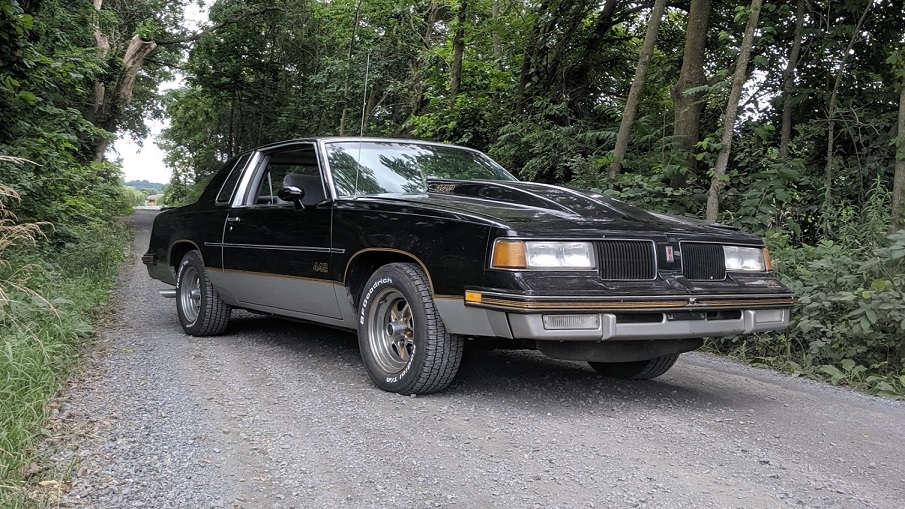 It is definitely not original, I was told it has a "355 Crate motor" with a "TH350" trans, but I haven't had time to confirm any of that. It definitely appears to have only 3 forward gears, and sounds like God's Own Chariot so so far, so good.

I didn't want an original to "ruin", as my thought is to turn this into a more "Trans Am" style car, emphasis on handling and linear power delivery, almost certainly with a manual transmission down the line.

Later, I found myself growing up in the back of one Oldsmobile or another. The malaise FWD ones. A Cutlass Calais here, a Cutlass Supreme there, mom and dad bought GM until I was well in my teens. When I was 16, I was driving my mother's Oldsmobile Achieva S, with the 3.1 V6, probably made all of 140hp...swerved to miss a deer, understeered off the road, overcorrected, rolled the sonofabitch. Turned her over so gently none of the glass broke, I was trapped inside, just after the apex of a blind corner on a country road. I don't think my mom ever forgave me for that, she loved that car.

Fast forward to my birthday this year, my wife is 6 months pregnant with our third daughter and asks me what I want. I joke that I want a g-body 442, and she says, "Ok, buy one. You'll need something to tinker with when you need some time alone." So here we are.

Right now, while it looks like someone took the body off at some point and did some work, there's still a lot that needs to be addressed. The current engine and trans are a big fat unknown, none of the interior indicators work, except for the "brake" light, and woe is me, the sunroof leaks. I avoided a t-top car to try and not have any issues but alas, seems if I wanted something that wasn't 15k, wasn't rusted to dust... I was buying something with a leaky sunroof.

Anyway, I'm Rex, and this is my totally rad Oldsmobile.
Reactions: SupremeSpeed, GP403 and TURNA 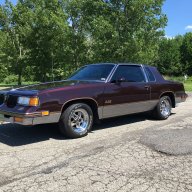 Welcome and great car. Good luck with the build. I wish mine had a sunroof instead of ttops. You should be able to get weather stripping to fix the leaky sunroof.
Toggle signature
If all else fails, throw money at it. That will fix it.
J

Welcome to the forum Rex. Looks like she's in pretty good shape on the outside. Good luck with the new project.

I spent some time this weekend really giving it a good look. I know it will need paint, but there were four spots that will definitely need more than just a cursory sand.

A week+ in, I still love this thing. My daughters are all about it, they think it's cool...

I discovered that whoever did the engine was concerned about precisely one thing: Going fast. There's no A/C which is fine, but when they routed the coolant around they also just...didn't do the heater core. I'll have to fashion some way to get coolant routed through the heater core for the fall, though I expect she'll sleep through the winter. (And of course, I'll pressure test the heater core first to make sure it isn't cracked or something.)

There's also still a mystery canister under the hood, its purpose unknown to me but looks factory. This weekend was spent cleaning and starting on the nursery, but maybe next weekend I'll get it inside the shop and see what can be done.

Fun story, I was driving it around (FOR PLEASURE WITHIN 250 MILES OF MY DOMICILE MIND YOU, VSP) and as I came into my neighborhood, a storm was blowing in. My wife was resting, heard thunder in the distance, and thought to herself, "Oh that storm is coming in fast, it's...oh it's in my driveway."


She does sound the business:

Ha, thanks! Yes, I am not the one who did the infliction of the "wrong" V8, but the positive is that now I won't feel the least bit guilty putting whatever I want under the hood. However, I promise not to do anything super ridiculous, even though a 2JZGTTE will ABSOLUTELY fit in there, there's loads of room.

The thing that's made me laugh most about the car is this: 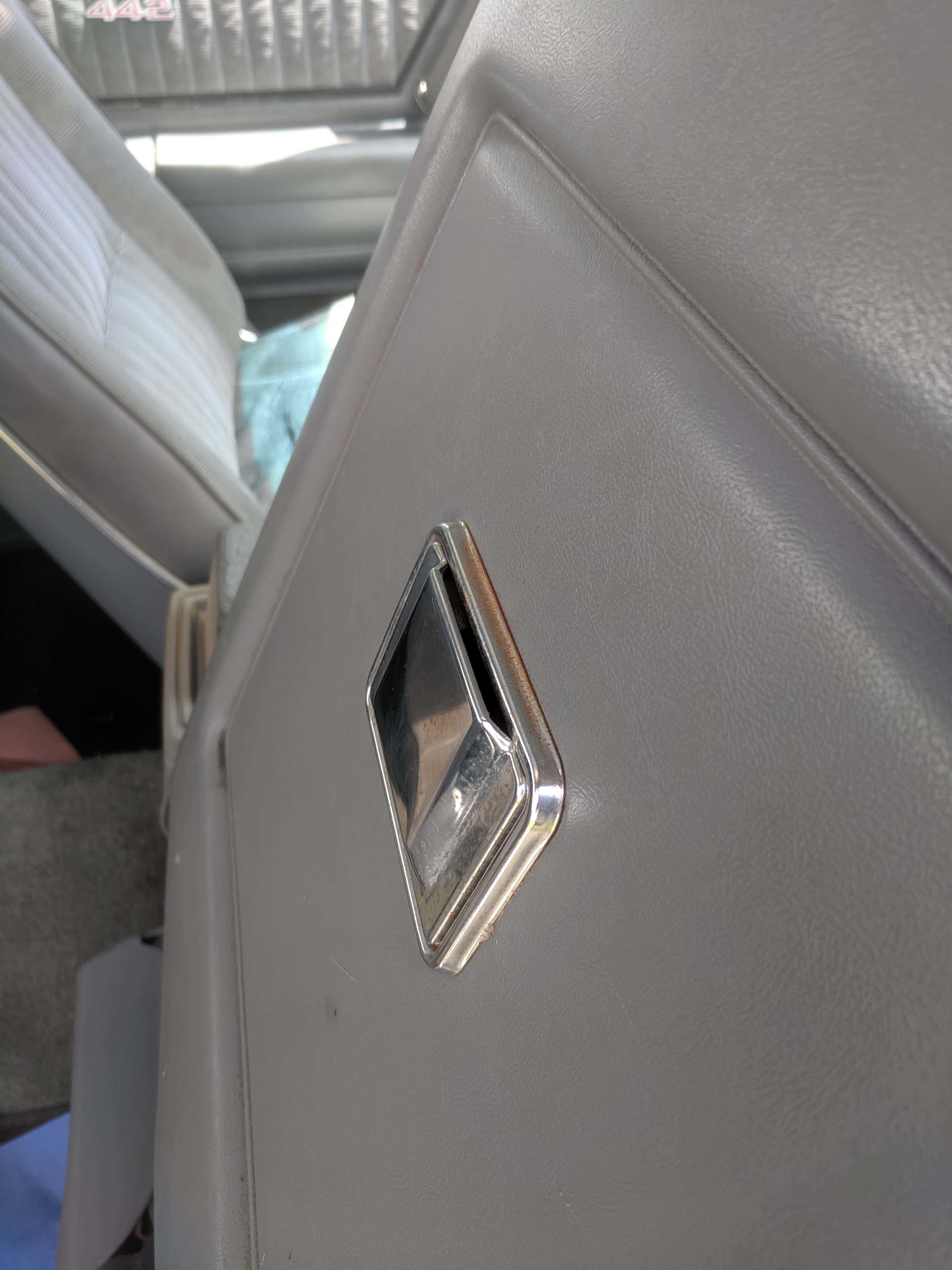 Not one, not two, but THREE ashtrays in this car, but not a single cupholder. My what a different time we find ourselves.

In other news, my Antique plates arrived today, so as long as I'm not too bold I can drive basically whenever I want.

SO. On to the project-ness. Does anyone have a link to a good tutorial for removing the headliner and getting it out of the car? When I did my Jeep's headliner, the whole thing came easypeasy right out the back hatch, but...no back hatch here.

All the YT vids I can find are for t-tops, which have a smaller and easier to remove headliner board.

Here is the link. There are a lot of pages with the whole resto but it is in there. Donovan is very meticulous but does things the right way.

Absolutely stunning work Donovan! Looking forward to the update on the Astroroof. And where did the W-30 badge come from? I don't remember seeing it on Olds Cool before?

Olds 307 and 403 said:
Here is the link. There are a lot of pages with the whole resto but it is in there. Donovan is very meticulous but does things the right way.

Absolutely stunning work Donovan! Looking forward to the update on the Astroroof. And where did the W-30 badge come from? I don't remember seeing it on Olds Cool before?

Big thread, but thank you! Will be very informative.

So for an update, I've been hooning around town scaring children and dogs and really enjoying the car. It's big but man they really DON'T make cars like this anymore. It's so cool it hurts. ANYWAY, one day it was kind of hard to start, and I pop the hood, two things.

Front accelerator pump is leaking and BAD. Puddles of gasoline in my intake manifold.

Sooooooooo, guess I'm doing a rebuild. Have to take the carb off to get to the pump, and if I'm going through all that I might as well re-seal the whole thing.

ALSO, some GENIUS routed, and I kid you not, the fuel line THROUGH the alternator.

She still looks super cool though. 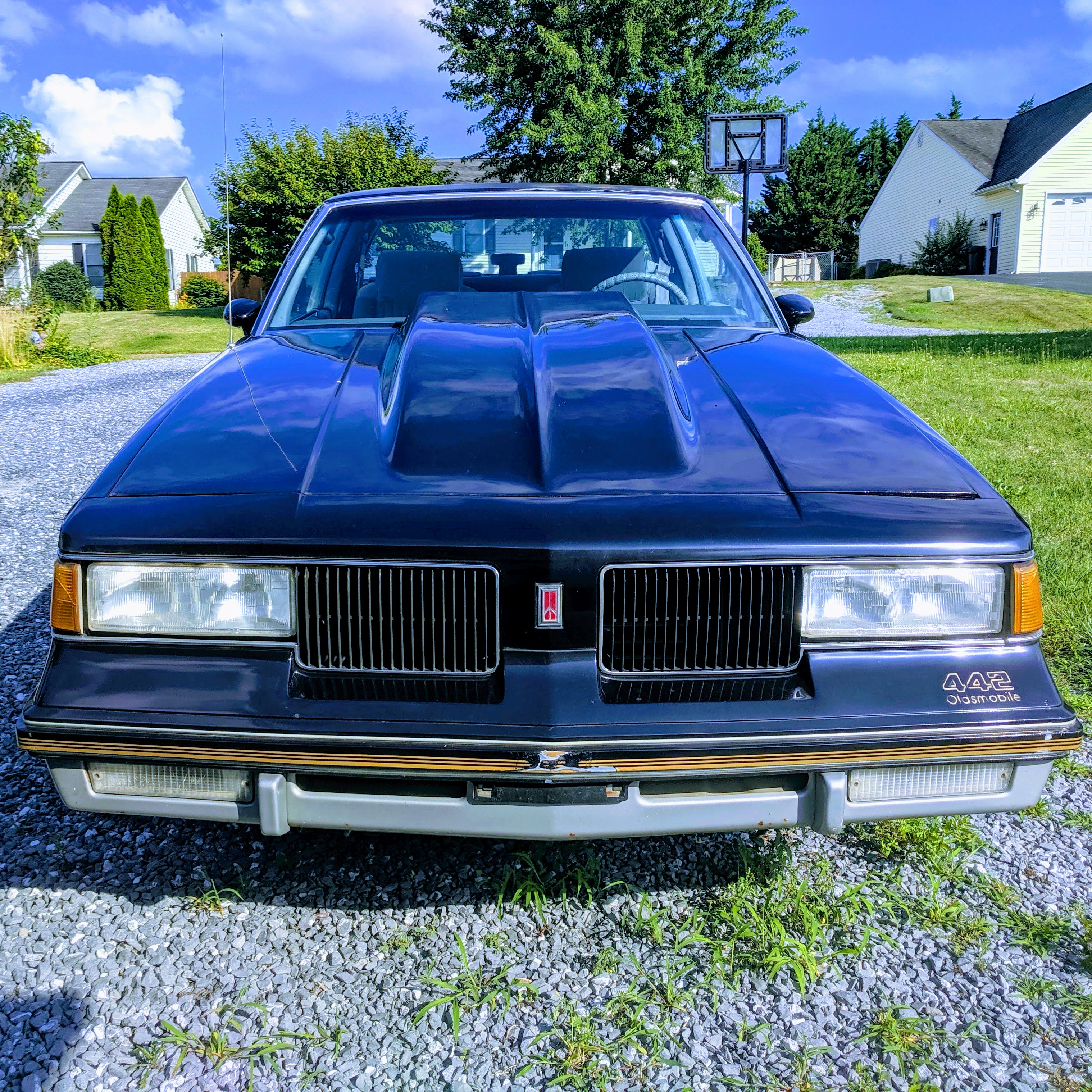 Say a prayer to the machine gods, she's all clean and ready to be reassembled... 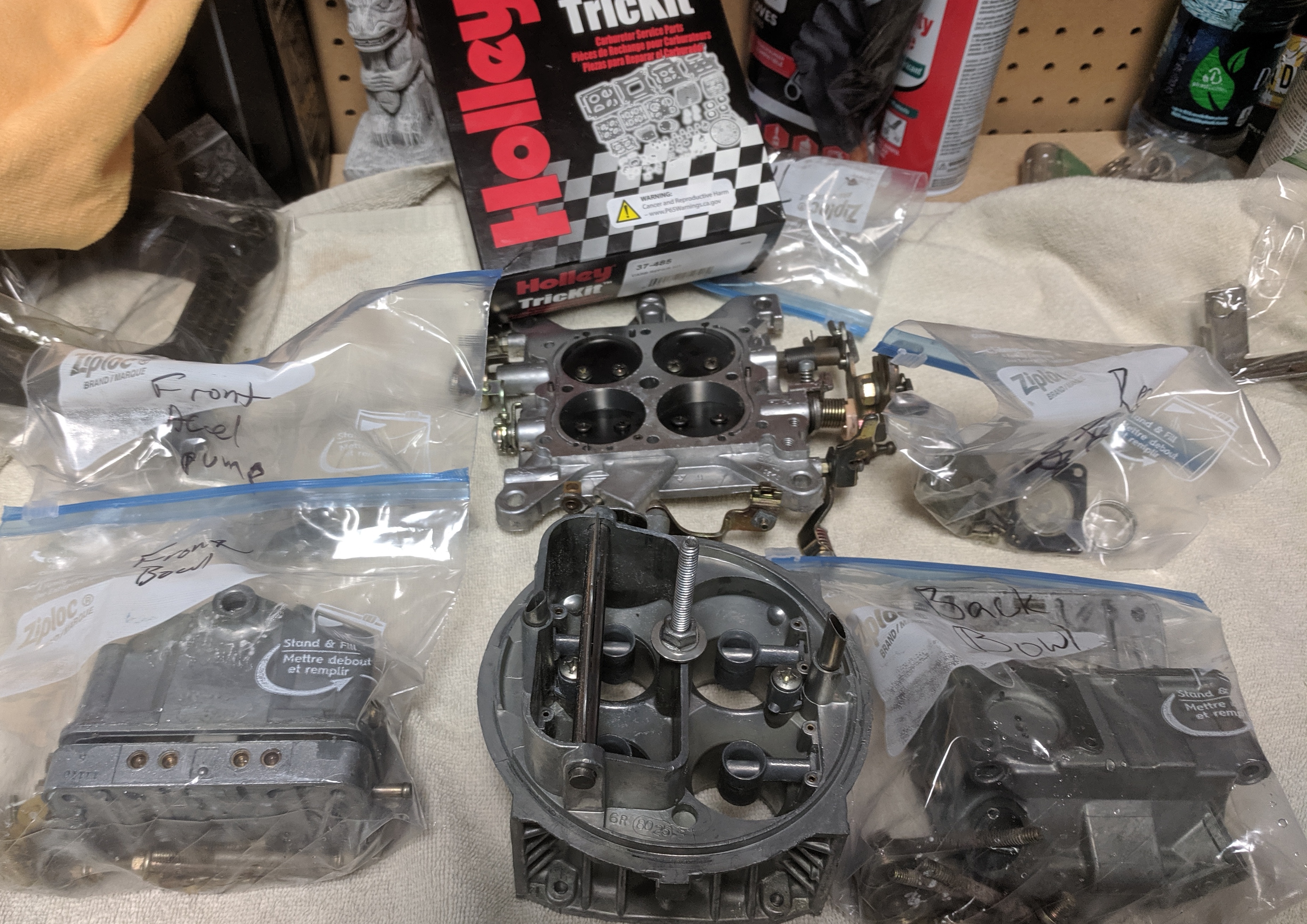 Reactions: SupremeSpeed and Olds 307 and 403 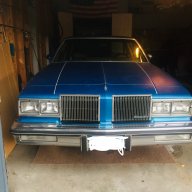 Looks sweet man! I have only seen 1 actual 442 in your year range here in CO.
You must log in or register to reply here.